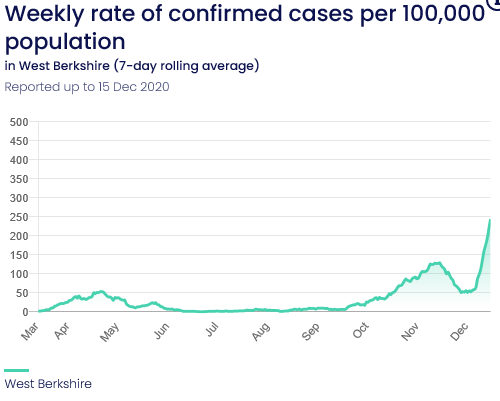 I am so sorry for everyone who has had their Christmas plans ruined by the decision on Saturday to move the whole of Berkshire into Tier 4.

This decision was taken because of new evidence that came to light about the new variant strain of the virus which has taken hold in the South East. Porton Down had been conducting tests on the vaccine over the course of last week and reported to the Prime Minister on Friday afternoon.

The statistics as they relate to West Berkshire are stark.

From when we left lockdown on 2nd December to the 17th December (the most recent published data), the rate of infection more than quadrupled: from 54.9 per 100,000 on the 2nd to 290.3 per 100,000 on the 17th. This is over less than a two-week period. The rate of infection is now rising here at a faster rate than any other part of Berkshire (and indeed most of the country) and is at the highest overall rate that it has been at any point during the pandemic.

Whilst it may be true that some parts of West Berkshire have seen little of the virus, I am really sorry to say that we cannot afford to be complacent. In Kent and parts of London where the new variant has a deeper grip, the hospitals are now at capacity.

What we know about the variant

Both Professors Chris Whitty and Jonathan Van Tam have told MPs that this particular strain of the virus is distinct because of its impact on transmissibility. You may well have seen – and they concur- that it appears to have a transmissibility rate that is approximately 70% higher than any previous variant. It is certainly attributed as the root cause of the spread in London and the South East.

It has been the subject of scrutiny at Porton Down because it represents a ‘distinct quantum change’ to the virus in in terms of its ability to enter host and multiply.

However at this point in time it does not appear to make the virus any more deadly. Professor Whitty told MPs:

“There are theoretical reasons why some of the proteins might alter the immune response – but the view is that this is not likely to be an issue with this variant.”

On Sunday 20 December 2020 Chris Whitty the Chief Medical Officer spoke to MPs in a call.

He told us that the Oxford/AstraZeneca vaccine is now awaiting approval and although he cannot confirm whether this will be given, the decision is expected within the next fortnight.

If that vaccine receives approval, it will make a massive difference to our ability to combat the virus. Professor Whitty said he believes that all those over 80 could have received their first dose of the vaccination by February.

I have spoken to a number of Primary Care Networks in West Berkshire and there is a collective interest in using the Racecourse as a central location for administering the vaccine. It is now anticipated that the Racecourse will be able to administer the vaccine from 11 January although this is a developing situation and I am expecting more information shortly. Also, most of the GP surgeries I have spoken to have suggested that if the Oxford vaccine receives approval they will be administering it direct from their surgeries since it is much easier to transport and store than the Pfizer vaccine.

On Sunday 20 December the Government published updated guidance about what Tier 4 means for you. https://www.gov.uk/guidance/tier-4-stay-at-home

In short the principles are similar to those you will be familiar with from other periods of lockdown. They are intended to prevent household-to-household contact to the greatest extent possible with  some exceptions and carve-outs:

I am in close contact with the Leader of West Berkshire Council. They are working with central Government on a further package of support. However, they are already ready with grants for businesses that have not been able to open since the end of lockdown – including wet pubs whom they are offering an additional £1000 in addition to the £1000 they can receive from Central Government.

The details of the support available can be found at: www.westberks.gov.uk/coronavirus-business-financialdifficulties

For anyone who has booked travel on coach or train for the dates 23-27 December – a reimbursement is now available. Please contact your operator.

It was such a moving experience coming down to Newbury Racecourse this morning. Seeing a steady stream of our most vulnerable and elderly residents arriving - often with a relative or carer - to receive their vaccine.