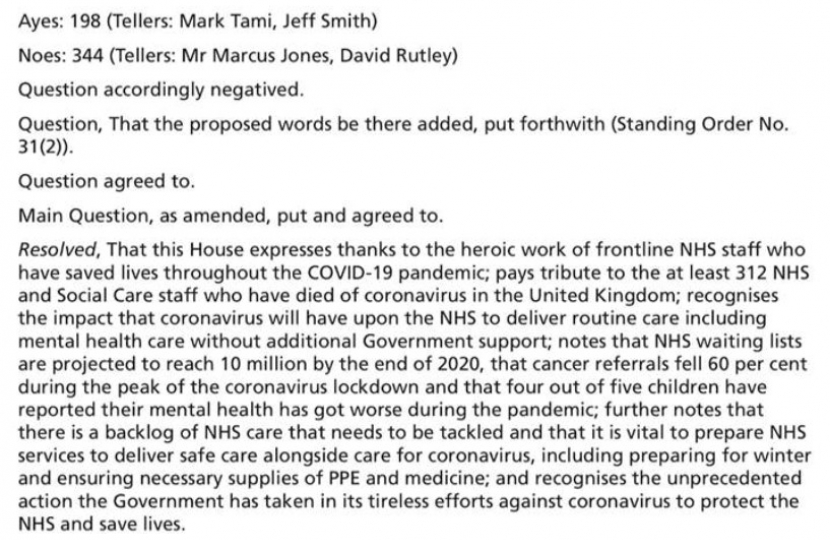 What I voted against was a general statement of intent that every member of NHS staff, an organisation which employs 1.5 million people, plus social care to have weekly tests regardless of their situation. This would have placed NHS secretarial staff, finance managers, software designers and other staff in administrative roles, many of whom will be working from home, on the same footing as frontline nurses and doctors.

At present, the Government approach to NHS testing is targeted. Front line staff – including doctors and nurses are given priority and this is particularly focused in the most high risk areas.  The clinical advice which has been provided by the Chief Medical Officer,  is to focus intensive asymptomatic testing in those areas or settings identified as having a high prevalence.  So for example, staff who work on wards will benefit from regular testing far more than NHS staff working in offices or in administrative roles where they do not come into regular face-to-face contact with patients. The Opposition day motion made no distinction between categories of staff working in the NHS or Social Care.

I would also like to point out that the UK is now carrying out well over 200,000 tests per day and has plenty of testing capacity.

After the vote, the Government went back to the Opposition with an amended version of the motion (see the top picture) which was agreed therefore it did not proceed to a vote and is not recorded on the public voting record. You will be able to see this yourself from the image.

It was such a moving experience coming down to Newbury Racecourse this morning. Seeing a steady stream of our most vulnerable and elderly residents arriving - often with a relative or carer - to receive their vaccine.